Everyone! There is a scam actually operating in Western Europe. I've just been a victim and since I don't want anybody else to live that story, I'll now explain mine. Excuse me for my sloggy english, but it needs to be written in a language that everybody knows.
It happened at Brussels, a saturday. I was on my way to a museum when a guy came to me. Visibly stressed, he asked me if I talked english. Since I was, I listened to him.
His (fake) name was Erik Nelson. He was a student doing his Ph.D in human rights (Note the irony) all over Europe. He was living in Svalbard, in Norway. It's a really lost island near of the North Pole. After 8 months of travel in Europe, here he was in Brussels, ready to take a flight to Oslo so he could back home but tragedy, his bag was stolen, along with his credit cards and his whole seminar work of 600 pages.
Not ready to waste 7 years of study, he has to go back to his homeland to tell to his university why he can't give his work in time and why he needs a delay. But it's urgent, if he isn't there in 2 days, everything will be lost and ruined for him.
At this point, it was really convincing. The guy really looks stressed and he got some (fake) material to prove his sory. Here is the list:

Now, before I continue, here is a description of that guy: a triangular head, glasses, no facial hair, chesnut hair, a fool breath, normal lips and ears, thin chin.

After I listened to his story, he told me, since he had to go back as fast as possible, he needed 230€ because he has some money on him (Including Sterling pounds, I saw them) but it wasn't enough to pay his trip and since his credit cards were stolen and it was a saturday, he couldn't go to a bank and ask for some money. Of course, it was almost impossible to find someone that could lend so much like that. That's when a bright light in this nightmarish hell came. His father, a "international lawyer" could send the money to the generous man that would help his son.

Of course, that was some big money and since I'm a kind guy (Not anymore now. Fuck you asshole) I was willing to help him. But I'm not an idiot so I wanted some guarantees I would have my money back. That's when he set his plan in motion and I was fooled. He had 2 possibilities: his father could send the money back on my bank account or via an Eurocheque he would have to send by DHL to the local Post Office. All I needed to give was my name and my date of birth.

I accepted the second solution, how wrong I was.

The guy called his "father" afterwards to say he found a dumbass readyy to buy his story. But since he was talking in some scandinavian language, I couldn't understand it and it added credibility to his story. I got the possibility to talk to him and gave him the information he needed. After that, I would have to wait 20 minutes and receive a email that would prove the tranfer has been done and I just had to wait 2 days and then, go to the Post Office, give the paper and finally have my money back, along with a good bonus, that is here to make people comfortable about the whole story. "Help me and you'll be rewarded" would resume well the whole affair.

I told him it was okay for me so we headed to an Internet café. while we waited for the email. He showed me the universities he was supposed to work for, adding some credibility to his backstory, then some photos he took in England and France, and finally explained thanks to a map the trip he did. I told to myself: it's too elaborate to be a scam. Of course, I never was a victim at this point and never really knew how they worked. I paid 230€ for this lesson.

So, I received the email, from this adress: olaf.nelson@windowslive.com, these lines were written in a bad english, even worse than mine:

In the attachement you can find the confirmation, that I purchased the travelles cheque for your name. you will get the cheque for amount of 350 EUR (The rest of amount i paid to the company is for insurance and tax)

On the bill of my account you can also see that i paid amount of 78.80 EUR for DHL delivery service. I spoke with DHL about your address and they recommended me one of the psot offices in the city center of Brussel. The cheque will be delivered there by DHL within next 48 hours. All you need to recieve (sic) this cheque in this bank is your personal ID card, or passport to proove yout identity. The amount of 350 EUR can be paid to you in the same post office.

For part of rest of money i transfered to you, please feel comfortable to take a dinner with friend of you.

I am sorry i can not see you face to face nd invite you for this dinner.

As a second attachement is scan of my ID card - my son asked me to send it to you as well.

Thank you very much again for saving university of my son

Seriously, an international lawyer writing in such a bad english? I should have been careful at this point. Plus, there were inconsistencies. The "son" never asked him to send an ID card. He even told me he was suprised he did this. But the story was so well-made until then, I overlooked that, decided I should trust the guy and really thought I could do some good since I would never ever want to be left in such the situation he was.

Along with the email, there were 2 documents: the confirmation the transfer has been made and a fake ID of the supposed to be father who was nothing alike his son. I noticed that and of course, the scammer told me he was more like his mother. Here they are: 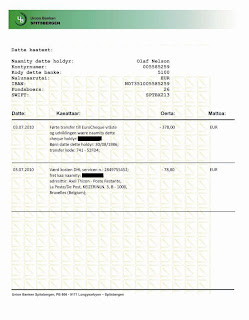 A paper from a bank that doesn't even exist with a lot of data to make you sure. There is even a DHL code I could have checked right away to see if it is really was safe but the scammer knows his job and was quick to derail to another subject, like how great his father is to have given me a bonus.

For the sake of google researches, I will now write what is written at the beginning of this document:

And now, the second document 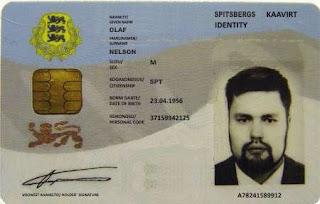 Yeah, that's the face of the asshole who was supposed to be an international lawyer living on a lost island. Take a good look and realize how pathetic he is.
Because of these documents, I told to myself it was a fair deal and I risked nothing. So I checked along with the scammer if the adress of the Post Office was correct, since I wanted to be really sure. Then, after we saw it was, I gave him the money.
It's now been 4 days, the Post office never received anything and thanks to another blog, I found out it was a scam. Here is its URL: http://negandoloevidente.wordpress.com/2009/01/23/un-timo-o-un-lance-de-viaje/
Since the info needs to be spreaded, I decided to create this blog to warn victims to NEVER fall for that trap, and for myself to feel better about it. 230€ isn't that big, but the guy played with my kindness. It's a question of principle.
If you've been a victim too, go to the police right now and give a description of the scammer. Then send a message and give ssome feedback to help others to not fall into this. This shit needs to be stopped.
Yours faithfully.
The Ant.
Publié par The Ant à 02:03